Physical Description: An athletic-looking male in his early 30's with blue eyes and short black hair, who is missing his left hand.  His costume is gray-colored medieval style garb.

Weaknesses
Physical Handicap - does not have left hand.
Psychosis - Bigotry:  hates all non-Caucasians, and may have to make an INT roll if taunted or attacked by a minority (a d20 roll if taunted, a d100 roll if he takes damage) to avoid attacking  that person directly.  He also suffers a -4 reaction roll penalty from most people who do not share his views.

Character Notes/Origin/Personality: Johnathan Harris was a cop in one of the worse parts of Philadelphia.  His talents weren't especially noteworthy, but he was considered a steady, reliable sort, the type you would want watching your back when things got dicey.  He disliked having to deal with non-Caucasians, but for the most part was able to hide that dislike well enough so that most people did not pick up on his prejudiced attitude.  He was much more hostile toward any gays he encountered, due to his own deeply repressed homosexuality, but aside from a couple of 'excessive force' situations that got him the occasional reprimand, it wasn't something that was an issue as far as anyone else knew.  His only real quirk, as far as his fellow officers were concerned, was his association with the Society of Creative Anachronism, where every now and then on certain weekends he would dress up in pseudo-medieval clothing, ride around on horses, and beat the crap out of people in mock-swordfights.

All that changed when he participated in a drug bust targeting one of the local street gangs.  The gang was better armed than the police was anticipating, and Harris was hit by an exploding round from one of the gangbanger's rifles, which pretty much destroyed his left hand beyond any hope of repair.  Johnathan survived, but was cut loose from the police force due to his injury.

Bitter, Johnathan drifted in and out of various white supremacist groups, eventually joining up with Norsefire, shortly after Odin had begun to re-create that group more in his own image.  Harris quickly became one of Odin's trusted lieutenants; his police experience meshed well with Odin's military background.  Harris became the first of the Norsefire agents to be granted powers by Odin and to join the ranks of the New Asgardians; now calling himself Tyr, he is Odin's (wait for it) right-hand man, second in command of Norsefire, having become a capable leader in his own right.  He is fully committed to Norsefire's goals, and is a loyal follower of Odin.

Campaign Use: Besides acting as Odin's second-in-command with the other super-powered Asgardians, Tyr can also be encountered by superheroes leading non-powered Norsefire agents on smaller missions, as well.
Posted by Knightsky at 8:02 AM No comments:

Email ThisBlogThis!Share to TwitterShare to FacebookShare to Pinterest
Labels: VandV

A few seasonal pics to remind me that it isn't actually snowing here... 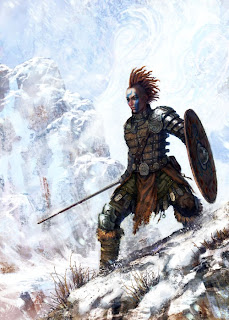 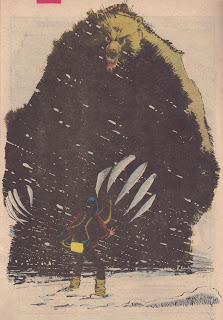 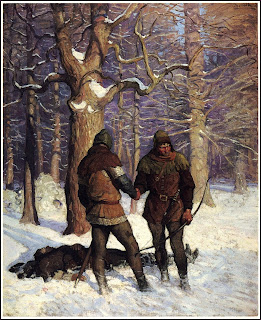 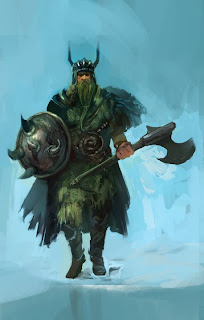 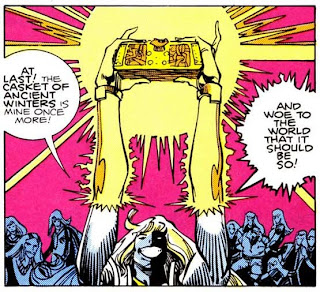 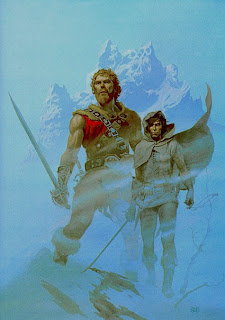 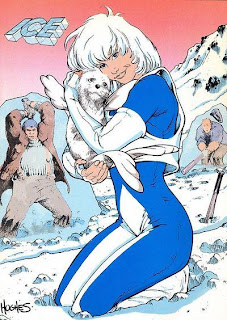 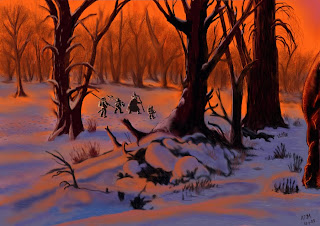 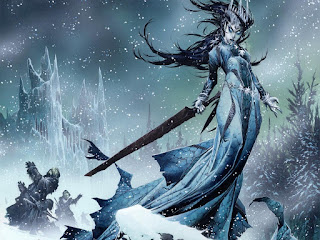 Posted by Knightsky at 7:53 AM No comments:

Kim Jong Il, you were a murderous dictator and an evil SOB, and if there's an afterlife you are surely roasting in Hell...

...but goshdarnit, you did help to contribute to one of the great cinematic moments of our age:


With a tip of the hat to Greg Hatcher , from whom I stole the idea for this.
Posted by Knightsky at 8:20 PM No comments:

It would be easy to abuse...

...but D&D characters who get killed off should perhaps have a 1% chance of returning as a ghost of some sort. 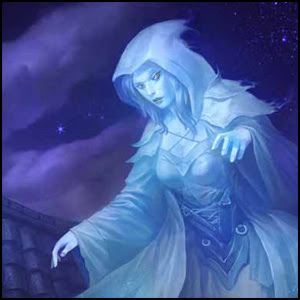 Posted by Knightsky at 7:06 PM No comments:

Email ThisBlogThis!Share to TwitterShare to FacebookShare to Pinterest
Labels: Castles and Crusades, Dungeons and Dragons

Following up Grace Under Pressure, Rush would collaborate with co-producer Peter Collins to produce yet another synth-heavy album, one that more than any of their other albums from this period would be firmly identifiable in later years as very much a product of the 1980's. Not as dark lyrically as its predecessor, Power Windows would deal with the concept of power, and how we react to it, in its varied forms. Unfortunately, Power Windows is much more hit-or-miss lyrically than Grace Under Pressure, resulting in a more uneven album. 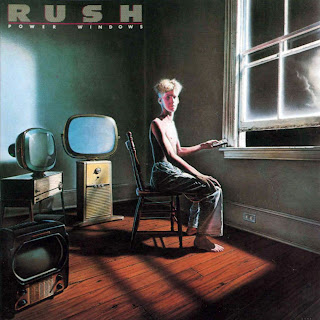 The album starts off strong with 'The Big Money', a catchy, energetic tune (inspired by a John Dos Passos book of the same name) that ponders the nature of money and the power it can have, for good or ill. “Big Money got no soul”, the last line of the song proclaims, neither inherently beneficial or harmful – what we do with it is up to us. After that is 'Grand Designs', a less noteworthy song about individuality and the plans one makes, that at times comes across as lyrically stilted and a bit forced.
Things pick back up with 'Manhattan Project' – a strong, driving tune about the bombing of Hiroshima, and how the atomic bomb still affects us today. Following next is 'Marathon', which uses the metaphor of a race to describe the value of persistence over the span of one's life; a symphonic feel, with a effective choral backing near the end, help to make this a powerful and anthemic song.
The second half of the album start off a bit weaker with 'Territories', a somewhat simplistic polemic against nationalism. 'Middletown Dreams' picks things back up, dealing with the soul-crushing nature of some smaller communities, and the value of dreams in temporarily escaping them; a more adult counterpart to Signals' 'Subdivisions'.


The last two songs suffer again from weaker lyrics. 'Emotion Detector', which deals with how our emotions can both strengthen and weaken us, has little to distinguish it musically. By contrast, 'Mystic Rhythms' – which deals with how we respond to the unknown - also comes across as a bit forced (the New Age-y lyrics seem at odds with Peart's normal approach to such things), but despite this, the atmospheric music combined with the simple-but-effective African sounding beat help to give this closing piece an appealing, almost hypnotic quality.
The production here on the album is clear and well-balanced, although it lacks a bit of the musical bite that the Terry Brown-produced albums did. Musically the songs are solid enough, although there aren't as many individual standout moments as there are on the band's other albums – 'The Big Money', 'Manhattan Project', and 'Marathon' are probably the three most musically impressive songs here. Alex has some good moments on the guitar here, even if there are at times a lack of dominating power riffs, and his chords don't sound as thick as one might wish. Although the synthesizers once again dominate the album, Geddy does get some great bass lines in when he isn't at the keyboard. Geddy's vocals here are clear, and convey well the different emotional contest of the different songs. Peart's drumming is solid throughout, although there's nothing overly noteworthy here in terms of percussion work; it's with this album that Neil also begins to rely a bit more on electronic drum effects than he had on previous albums (although Peart's drumwork is so sharp and precise that it can be hard to tell the difference at times).

Unfortunately, the uneven lyrical content hampers what would otherwise be a better album. Overall, this isn't as good as Grace Under Pressure, and it's about a half-notch below Signals as well. Although here are some fine songs here, Power Windows falls under the good-but-not-great category; even if one is interested in the band's synth-heavy oeuvre, there are better albums to start with.
Posted by Knightsky at 7:13 PM No comments:

You can probably guess how I voted

Should Rush be inducted into the Rock & Roll Hall of Fame? 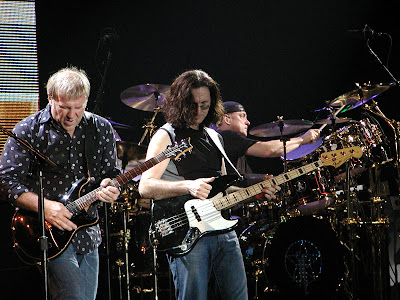 Posted by Knightsky at 5:57 PM No comments:

Email ThisBlogThis!Share to TwitterShare to FacebookShare to Pinterest
Labels: Rush 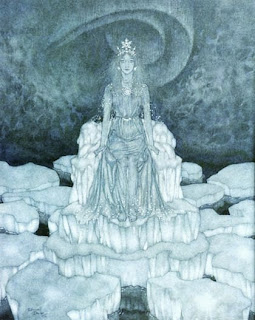 Much is speculated, but little is truly known, about the enigmatic figure known as the Snow Queen.  That she resides in the frozen northern lands, and is a magician of great power, is accepted as fact.  Of the rest of what is said, most of it is contradictory, and all of it may be unreliable.  After all... men lie.

There are three common theories as to the nature of her existence.   Some say that she was once a mortal sorceress who bargained for, and gained, great magical power, but at a terrible cost.  Others say that she was a demon who has been trapped in a mortal guise, bound to the frozen lands by an ancient pact.  Still others whisper that she was once of the Sidhe, but was banished from the faerie lands for crimes so horrible that even the other fae could no longer abide her.  Only the Snow Queen knows for certain what is true, and she prefers not to speak of her past.

Although she prefers her frozen domain and the castle of ice that resides there, she can travel to any land where snow or ice can be found on the ground.  Her home is said to be rich in treasures acquired from ships that sailed too far north into the icy waters, as well as the weapons and armor of those who dared to try to invade her castle.  Some whisper that those who have died in her domain continue on in a half-life, forever under her command.

It is said that she can see and hear anywhere that the winter winds blow, should she so choose.  It is for this reason that some seek her out, not for sake of treasure, but instead to gain knowledge.  It is for this same reason that those who live in the northern lands often do not speak of the Snow Queen by name, for fear that she will hear them and take offense.

It is possible to bargain with the Snow Queen, but the bargainer must be very careful in doing so, for she both wise and unforgiving of error  More than one adventurer has found himself trapped in her domain, a victim of their own hubris.
Posted by Knightsky at 7:33 PM No comments: