And so we start off, not with a bang, but with something of a whimper.

The original UWP of Palompi, the first planet we see (from the hex-number order) is X100000-0.  Which, in Traveller-speak, is a lifeless, airless rock, perhaps only a thousand miles in diameter, with no one living on it.   Quite frankly, there's not much reason for any travellers to visit this system.  The updated 'canon' UWP data is only slightly more interesting, but that's only because it doesn't make a whole lot of sense.  With a UWP of X101200-0, a PBG of 600, and stellar data of M2 V, we have the same airless rock (orbiting a red dwarf star), but now with some surface moisture (about 10%) on the small planet, in spite the fact that with no atmosphere and very little gravity the idea of any surface moisture somehow being retained seems rather unlikely.  Worse, we now have a population of about 600... despite the fact that this is a lifeless rock, and they have absolutely no technology worth mentioning.  Unless we assume the natives are some sort of energy beings that can survive in a vacuum and have no need whatsoever for technology, this can probably be safely ignored.

Still, there should be some reason why this system is on the maps, or at least, why it once was.  Let's run with the idea that there was once a mining colony here; at its peak it held about 600 inhabitants or so.  The operation was run by nearby Rickamil (and therefore, Sphere Fenix), the only hi-tech world within jump-1 range of Palompi (one parsec coreward of Palompi is Ambale, in the Induz subsector of the Maranantha-Alkahest sector, but Ambale is a pre-spaceflight world, and would be rather unlikely to run any off-world mining operations as a result).  As with many airless worlds, the working and living areas were mostly constructed underneath the surface as opposed top on it.  The primary element mined here was lanthanum, but various other rare ores and minerals were collected as well.

A little over a century ago, the lanthanum deposits were eventually depleted, and Rickamil eventually pulled its people out; the remaining other minerals and ores that were still available weren't enough to justify ongoing operations.  Eventually, due to internal political pressures, Sphere Fenix 'let go' of Palompi, not wishing to spend even token resources defending an otherwise pretty useless piece of rock. 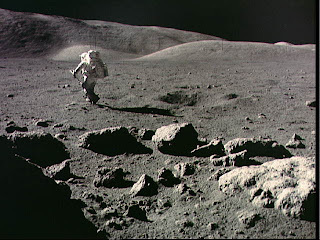 Should anyone find their way in the Palompi system, there's only a slim (roll 12 on 2d) chance of another ship in the system. Such a ship would probably (1-5 on d6) be trying to mine for the remaining various ores and minerals available - what is insufficient for a government body might still prove profitable for an individual or small group. Non-miners might be exploring the underground facility that once housed those who lived here.  Most of the really valuable equipment was either taken backed to Rickamil or later stripped by those who came after, but the underground facility is decently large, and there's always the chance that there's something of interest and/or value might still remain, especially if one is willing to spend some time exploring past the initial entrance area.  In either case, only starships that have the fuel capacity for two jumps (one to Palompi, and the other to whatever nearby system that would like to go to) would willingly travel to this system.
Posted by Knightsky at 7:48 PM