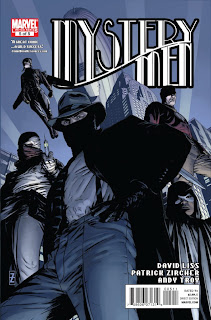 Mystery Men #5 (of 5) (Marvel, $2.99, David Liss, Patrick Zircher) - Our heroes have a second, and final chance, to thwart Nox and the General's plans.  Despite not being terribly inclined to work together, necessity forces them to do so, and this time they fare better than their previous encounter with out villains, in a taut battle aboard a zeppelin (and really, how cool is that?).  However, victory doesn't come without a price, and one of our heroes makes the ultimate sacrifice.  The conclusion is a satisfying one, although left open enough for future stories to follow.  I hope that there are more stories to come with these characters, as I enjoyed this story quite a bit.  Moreso, Liss and Zircher work well together here, and I hope that they would be able to return for any future issues featuring these characters.  Recommended, especially for anyone who considers themselves a fan of the pulps. 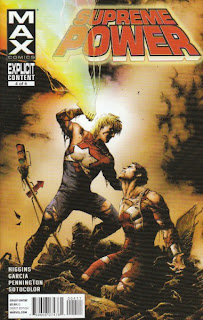 Supreme Power #4 (of 4) (Marvel/Max, $3.99, Kyle Higgins, Manuel Garcia) - There are two conclusions here, one dealing with the French superhuman killing people in Hyperion's name, the other is the final battle between Hyperion and Dr. Spectrum.  The former is dealt with swiftly, partly as a something of a fake-out (given that he was built up as a major threat), but also to give a little more room for the latter to play out, with a few swerves along the way.  This isn't the best written story in the Supreme Power/Squadron Supreme series (among its flaws is that the ending is a little vague in spots), but it gives enough of a sense of resolution for the franchise that it has an ending that works, while at the same time leaving the door open for future stories should this sell well enough to warrant it. 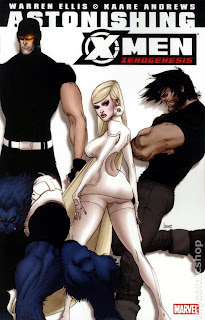 Astonishing X-Men: Xenogenesis (Marvel, $19.99, Warren Ellis, Kaare Andrews) -The last (as far as I know) of Ellis' run on Astonishing X-Men is collected here, and it's pretty much just as good as the two previous volumes of his work on the title.  Once again, he has to dance around the asinine '198' edict, and once again he manages to get a good story out of it, this time mining an old idea from Alan Moore's run on Captain Britain decades ago.  A series of seemingly mutant births are occurring in a small town in East Africa, and it falls to the X-Men to investigate.  Of course, nothing is ever quite that simple, and the ending is, to say the least, bittersweet.

The script by Ellis is the main selling point here.  The plot is sharp, and the dialogue comes across as fairly natural as well as often quite hilarious.  The art by Andrews is stylistic, slightly cartoony, but overall rather appealing.  If nothing else he knows how to draw people in what appears to be actual clothing (as opposed to skintight spandex), something of a lost art these days.  He also does pretty well with the various action sequences.  Besides the five issues reprinted here, there is also both the uncolored pencils and the original test script for the first issue included here.  If you liked the first two collections of Ellis' Astonishing, you'll like this as well.  Very much recommended. 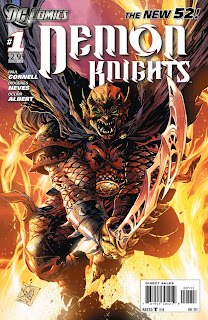 Demon Knights #1 (DC, $2.99, Paul Cornell, Diogenes Neves) - Whatever faults Cornell had with the introductory issue of Stormwatch, thankfully they're not on display here.  This is essentially a Dungeons & Dragons story set in the DC Universe's past; full of magic and odd characters, and gleefully anachronistic in spots.  Heck, most of our characters even meet in a bar, and if that's not a D&D trope, I don't know what is.  Set four centuries after the fall of Camelot, Madame Xanadu and Jason Blood (aka the Demon) get the most stage time during the first issue, but several other characters also appear, with hints of more details regarding them to follow in the issues to come.  Cornell's story is fun and engaging, and the art by Neves manages to ground the fantastic elements just enough to carry the story, while at the same time embracing the more outlandish and absurd elements therein.  A really fun first issue, which promises a heck of a ride to come. 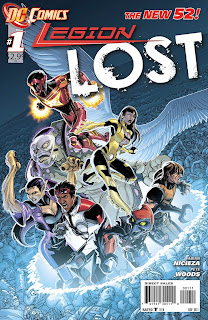 Legion Lost #1 (DC, $2.99, Fabian Nicieza, Pete Woods) - As a long-time Legion fan, I pretty much had to pick this up.  I don't regret doing so, but if I was new to the Legion I'm not so sure that would be the case.  Seven Legionnaires travel back to the 21st century, in the hopes of stopping the bad guy Alastor from destroying humanity with a deadly virus.  In the process their time bubble is broken, much of their equipment no longer works, and, oh yeah, two of their team members 'dies'.  Not that I believe for a minute that the pair in question is actually dead -  no bodies, no deaths - but quite frankly they were the two characters that I looked forward the most to interacting with the others, and until their eventual return occurs the book will, I suspect, be poorer for not having their characters added to the mix.

As is, other than being a Legion fan, there's not a whole lot here to interest me so far.  While we get a basic idea of the cast and their capabilities, we aren't exactly given much reason to care overly much for them.  Alastor is even less well defined (there were some online postings on CBR some time back that give some insight into his motivation, but if you missed it you're SOL), and so far there just isn't that much there to care about him one way or the other, other than he's the bad guy of the piece.  Even for long-time Legion fans, this feels like you've been dropped in the middle of an ongoing story; on those terms, it's not too bad, but I honestly can't recommend this to anyone not already familiar with the Legion mythos as a gateway into the greater Legion universe.  Quite frankly, I expected better from Nicieza.  The best that can be said is that the art by Woods is decent enough (although it's not his best work by any means).  For hardcore Legion fans only, if the first issue is any indication.
Posted by Knightsky at 9:51 PM