Following the success of Signals, Rush would continue to move forward with a more synthesizer-based musical sound.  Along the way they would part ways with long-time producer Terry Brown, looking for someone new to work with that would help them explore the various options and possibilities that lay before them.   Steve Lillywhite had committed to produce the album, but backed out at the last minute, forcing the group to scramble to finish the album in time for the already set upcoming tour dates.  They would eventually produce the new album themselves with the help of co-producer and engineer Peter Henderson, with the end result being the aptly named Grace Under Pressure. 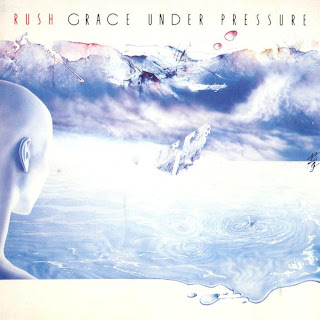 The album starts off quite well, beginning with 'Distant Early Warning' a tense, ominous, yet catchy tune.  'Afterimage' is a powerful song about the loss of a loved one, and the memories left behind after they are gone.  'Red Sector A' evokes imagery of Nazi concentration camps, but in a way that can be applied to any such bleak prison environment, past, present, or future.

'The Enemy Within' is part one of Peart's 'Fear' series; a decent song, but it's a half-step down compared to the three preceding it, and it's also not quite as good as the other 'Fear' songs from previous albums.  Fortunately, the album picks right back up with 'The Body Electric', yet another catchy tune with somewhat ominous lyrics.  'The Body Electric' in part stands out on the album as it between the two lesser songs on the album; the album's other slight roadbump, 'Kid Gloves', follows after it; it's a musically decent tune, but it's not Peart's best lyrical effort, a weaker counterpart to Signals' 'Subdivisions'.

'Red Lenses' picks the quality back up; a fun tune that adds a bit of lightness to an otherwise lyrically dark album (just how many rhymes and synonyms for "red" can you work into one song, anyways?).  A lot of people don't seem to like 'Red Lenses', but I suspect they're comparing it to they type of song that it's not even remotely trying to be.  The album concludes with 'Between The Wheels', a strong commentary on the political and social uncertainty of the day.

Of the four synth-heavy albums the band made during the 80's, this is probably the best of the lot.  Lifeson's guitar is more prominent here, and isn't drowned out by the synthesizers and keyboards the way it had been on Signals (by contrast, Lee's signature bass lines are far less prevalent, with a few notable exceptions).  Peart's lyrics, while dark and bleak at times (even moreso than his work on Signals), are also introspective and engaging.  The synthesizers integrate well with the rest of the music, and do not overpower or detract from the various songs (as they occasionally do on some of the songs on the other albums from this period).  There are only two lesser efforts here, and they both represent only slight dips, and are not major hindrances to the album.  It's very much an album of its time, an era fraught with cold-war uncertainty, but it also has a certain timeless quality that holds up well today.   Overall, if someone wanted a sampling of the band's output during this particular musical era, Grace Under Pressure is probably the album to pick up.
Posted by Knightsky at 5:39 PM